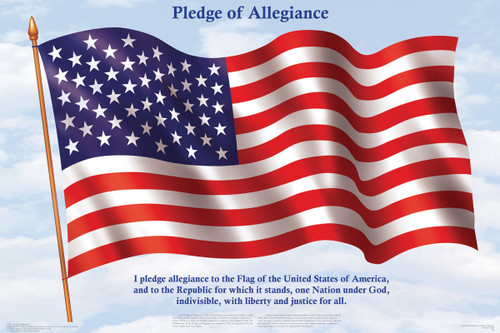 This poster is 36" x 24" and makes the perfect addition to a classroom, study, or children's bedroom.

The Pledge of Allegiance of the United States is an expression of fealty to the flag of the United States and the republic of the United States of America. It was composed by Francis Bellamy in 1892 and formally adopted by Congress as our national pledge in 1942. The official name of The Pledge of Allegiance was adopted three years later. On Flag Day 1954, the words “under God” were added. On that day, President Eisenhower proclaimed, “From this day forward, the millions of our school children will daily proclaim in every city and town, every village and rural school house, the dedication of our nation and our people to the Almighty.... In this way we are reaffirming the transcendence of religious faith in America’s heritage and future; in this way we shall constantly strengthen those spiritual weapons which forever will be our country’s most powerful resource, in peace or in war.” It has since been used to open many a school day. It is also used to open many federal, state, and local government meetings. This is a must poster for every American classroom and government office.