Free Standard Shipping on All US Orders.  -  For a Limited Time Save 10% Automatically on 3 or More Paper Posters 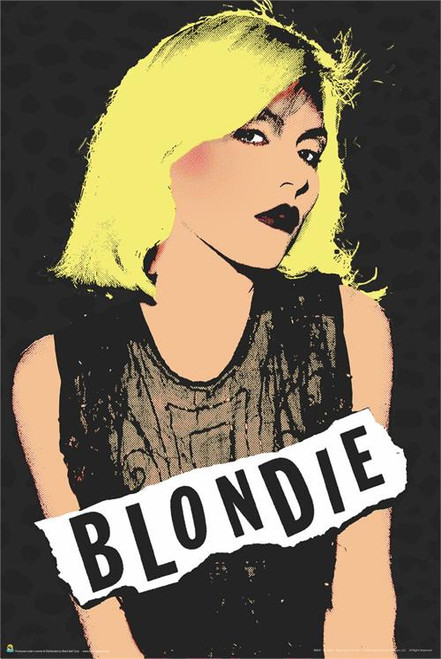 This poster makes the perfect addition to an entertainment room as well as a teen or college student's room.

Blondie is an American rock band founded by singer Deborah Harry and guitarist Chris Stein. The band was a pioneer in the early American new wave and punk scenes of the mid-1970s. Their first two albums contained strong elements of these genres, and although successful in the United Kingdom and Australia, Blondie was regarded as an underground band in the United States until the release of Parallel Lines in 1978. Over the next three years, the band achieved several hit singles including "Call Me", "Atomic" and "Heart of Glass" and became noted for its eclectic mix of musical styles incorporating elements of disco, pop, rap, and reggae, while retaining a basic style as a new wave band.

Blondie broke up after the release of their sixth studio album The Hunter in 1982. Deborah Harry continued to pursue a solo career with varied results after taking a few years off to care for partner Chris Stein. The band re-formed in 1997, achieving renewed success and a number one single in the United Kingdom with "Maria" in 1999, exactly 20 years after their 1st UK No1 single. The group toured and performed throughout the world during the following years, and was inducted into the Rock and Roll Hall of Fame in 2006. Blondie has sold 40 million records worldwide and is still active today.
×
×